A short while ago I came across a vlog on the website of the German weekly STERN in which two female journalists, one expressly secular, one Muslima, discussed whether feminists could wear a hijab (actually, they referred to the garment as Kopftuch [head scarf] which perhaps defused the contentiousness of the debate somewhat). Somewhat unsurprisingly they agreed that yes, indeed, feminists can wear hijab and, perhaps more crucially, hijab-wearing women can be feminists.

The discussion became a bit more interesting when the discussion turned to whether public officials such as judges in the German courts system should be allowed to wear burqas. One answer was a clear no, the other answer that person would not be interested in being a judge in the first place. True enough, but still a cop-out, I would think.

The discussion of course touches on a perennial topic when it comes to ‘Muslim dress’: do we assume a stable meaning of the garment itself, i.e., a firm commitment to Islamic values that contradict or even threaten our ‘Western’ or ‘secular’ societal values in a ‘fundamentalist’ way, or are they the freely chosen clothes of women who want to express their religious, cultural or ethnic identities? Arguably, the ban of niqabs, hijabs and other Muslim dress items in Western countries reflects the former position, while the latter folds garment choices into principles of religious freedom and freedom of expression. As Marianne Franklin has argued in her brilliant chapter in The International Politics of Fashion, Western narratives are still caught in this conundrum, either reading ‘Islamic fashion’ as part of a post-9/11 geopolitics of violence, or as an assertion or expression of the ‘transitory, mobile, and fragmentary’ nature of modern fashion.

A very effective way of driving the latter interpretation was recently offered by Cardi B in her sartorial performance in an outfit by UK designer Richard Quinn in front of the Eiffel Tower in Paris. It is not quite clear whether she actually intended this appearance to be a critique of the French anti-burqa laws, although it was certainly perceived as such. The idea to adopt such garments  for a prêt-à-porter runway or an inimitable stunt by Cardi B is certainly an effective way to deconstruct any facile and essentialising understanding of their significance. Perhaps the effect would have been even more powerful had she worn a dress created by the many Muslim fashion designers that work in this business.

The Museum für Angewandte Kunst in Frankfurt had a fascinating exhibition on Muslim fashion earlier this year with some truly beautiful examples of how Muslim women engage creatively with sartorial codes in their culture(s). Interestingly, there were also some garments designed by Western fashion houses such as Dolce & Gabbana,

and Marchesa, illustrating the continued popularity of these houses in the Arab and Muslim world. 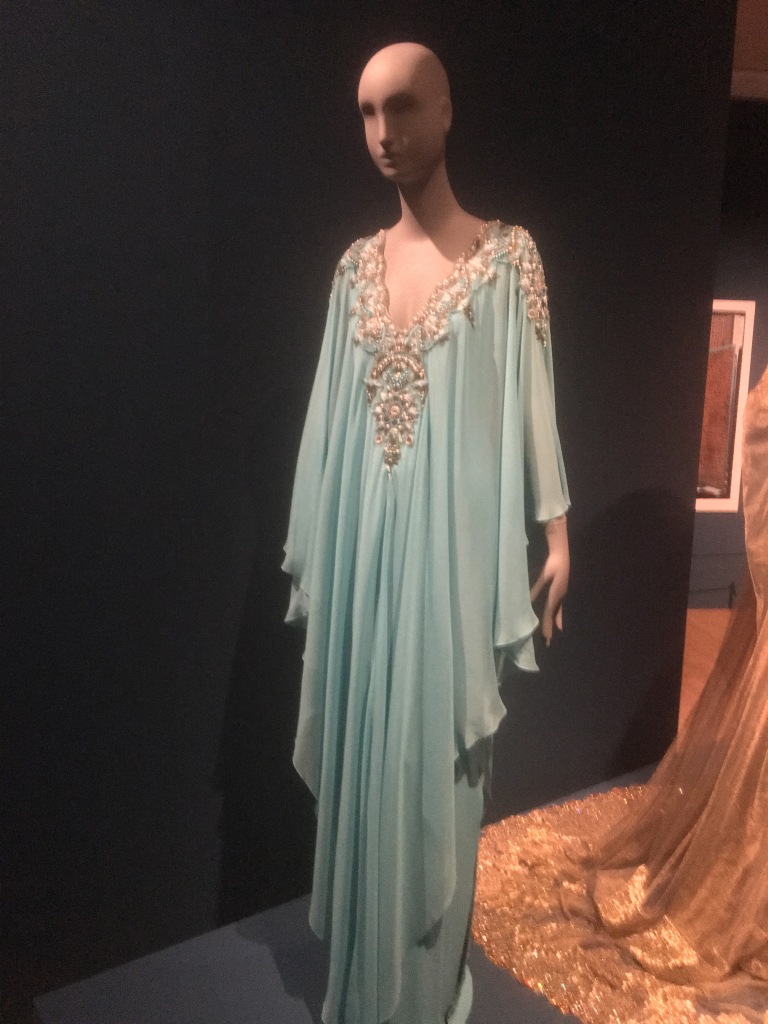 I was most surprised to learn that there are fashion designers even in Saudi-Arabia, a country not usually known for its open attitude towards women’s rights and women’s fashion. But Mashael Al Rajhi’s dresses were quite striking in her ‘cutting edge deconstructed looks [that] blend traditional and contemporary elements’. ‘We have the ability’, she comments, ‘to influence mindsets, and it is a form of expression and freedom. It allows us to form our identity and give people a chance to achieve their potential’. 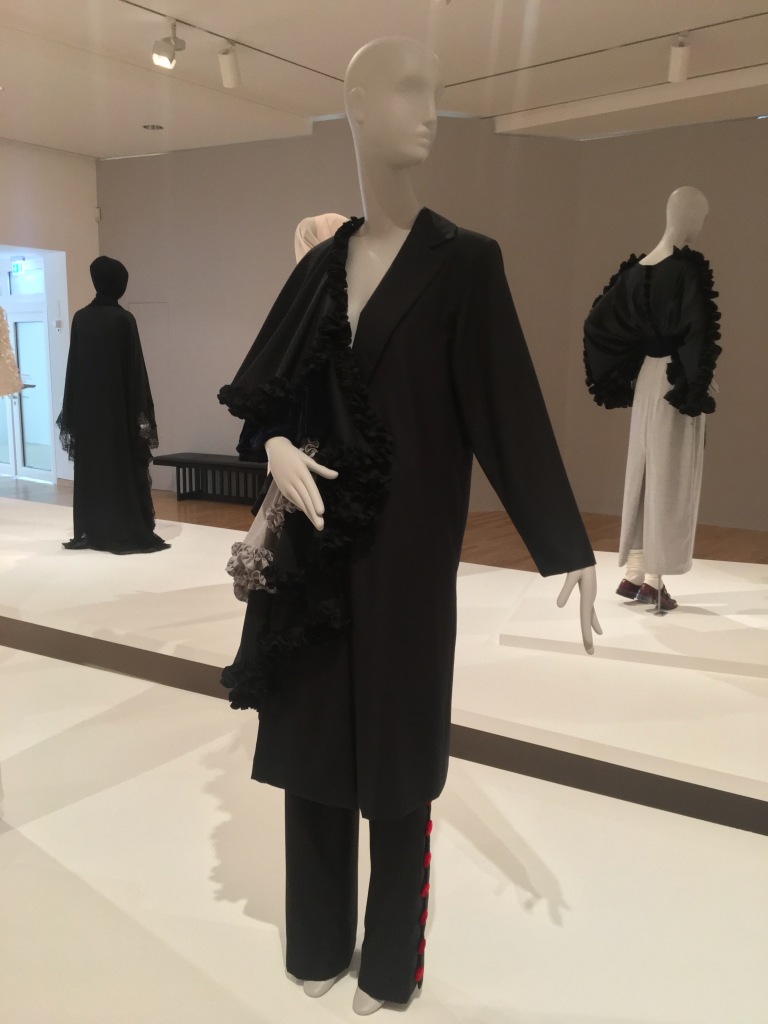 The sartorial play between traditional and current influences was evident in many of the displayed dressed. As such, the exhibition made a strong counterpoint to the facile gestures towards ‘fundamentalism’ and ‘oppression’ that are all too frequently deployed in the West and which underpin the various bans of such garments.

The ‘emancipatory’ aspect of Muslim fashion was recently also emphasised by Congresswoman Ilhan Omar in an interview with VOGUE Arabia. ‘To me wearing the hijab means power, liberation, beauty and resistance’. It becomes a sartorial symbol for ‘representing something different from the norm’.

It might be tempting to assume a ‘progressive’ position about Muslim dress code, drawing on these examples, against the various bans of niqabs, hijabs, burqas and so on. Surely the aestheticisation of these garments via contemporary fashion designs, their appropriation and dissemination by recognised fashion houses and their proud display in places of power such as the US House of Representatives 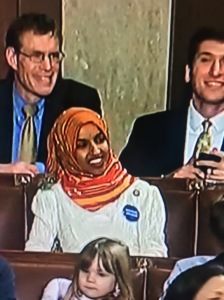 supports the opposition to the essentialised reading of these garments as expressions of freedom rather than fundamentalism and oppression.

But such a position would simply repeat the error of its opposition by yet again essentialising the meaning of Muslim fashion. As two Iranian writers and activists, Masih  Alinejad and Roya Hakakian, have reminded the fashionista community in response to Omar’s praise of the hijab, ‘There are two types of hijabs. The difference is huge’. While recognising Omar’s argument, they offer an alternative kind of the hijab and its signification:

In the second kind of hijab, the woman has no agency. Where we lived, the terms were set by Iranian government authorities under a mandatory dress code that banned women from wearing makeup in public and forced them to wear a baggy, knee-length garment to fully disguise the shape of their bodies, over a pair of pants and closed-toed shoes. For a while, the authorities even decreed the colors that women could wear: gray, black, brown or navy.

Women who live under these forms of hijab effectively live under a gender apartheid. The coverings mark women as lesser citizens, legally and socially unequal.

By itself, the hijab is a mere piece of cloth. Tyranny turns it into a symbol of oppression. It is democracy, with its embrace of diversity, that turns hijab into an emblem of power or beauty for those who choose to wear it.

The last statement needs amending, though. Given the reified and essentialised reading of Muslim fashion in the West, wearing the hijab here turns into a sign of resistance, not just beauty, much as Omar observes. In turn, the above intervention from Iranian activists suggests that Iranian dress codes for women are about more than ‘religious precepts’ as stated by Marianne Franklin. They structure relations of power and are therefore deeply political. And not wearing that ‘piece of cloth’ becomes as much an act of resistance and self-empowerment as wearing it in the West does.

Fashion itself is immoral, resisting any hegemonic value system. The politicised play of ‘what (not) to wear’ therefore is best understood as a subversive move within particular politico-cultural contexts, not the expression of any inherent sartorial meaning.

2 thoughts on “What (Not) to Wear to Subvert Political Order”