As the attentive reader of my chapter in The Politics of Fashion: Being Fab in a Dangerous World will remember, I concluded by stating that fashion as a symbolic form of modern sovereignty still operates in the shadow of Marie-Antoinette. Masculinised power requires feminised glory, usually provided by First Ladies. Their ‘fashion diplomacy’ provides focal points for acclamation and, when it fails, accusation, respectively supporting or diminishing the legitimacy of the respective administration.

The recent debate about Melanie Trump’s peculiar wardrobe choice for her trip to a children detention centre in Texas illustrates this point in a powerful fashion. Both traditional and social media went into overdrive trying to divine what the ‘I REALLY DON’T CARE. DO U?’ graffiti on the back of her Zara jacket could possibly mean. Given the purpose of the trip – to demonstrate some compassion for children taken away from their parents as part of an inhumane ‘zero tolerance’ policy towards allegedly ‘illegal immigrants’ – the statement understandably led to some cognitive dissonance for many journalists, pundits, social media writers and fashionistas. The case is in a sense even more interesting than Michelle Obama’s fashion faux-pas in August 2009 when images of Mrs Obama emerged during a vacation that showed her descending from Air Force One wearing shorts, T-shirt and sneakers. As Robin Givhan reminded her, ‘ultimately, the first lady can’t be — nor should she be — just like everyone else. Hers is a life of responsibilities and privileges. She gets the fancy jet. She has to dress for the ride’. That event was clearly a sartorial blunder, acknowledged as such by Mrs Obama later on BET. Mrs Trump’s choice on the other hand seems to be more conscious and purposeful – but what purpose, what message precisely are we to read here? The most disingenuous answer was offered by her spokesperson: ‘It’s a jacket. There was no hidden message’. This is of course true, as many noted, there is nothing ‘hidden’ about the message scrawled across the back of the jacket. Moreover, other circumstantial evidence suggests that the First Lady deployed her sartorial message with some level of intention: wearing the jacket on a humid and warm day and allowing photographers onto the tarmac at Joint Base Andrews where she took off and landed suggested to a number of observers that the dissemination of this message was not an accident.

END_OF_DOCUMENT_TOKEN_TO_BE_REPLACED

The V&A in London is hosting an exhibition these days entitled Fashion from Nature. If you are living within the Greater London area and care about the relationship between the most ‘artificial’ and the most ‘genuine’ realm of human experience, you should definitely make some time for it, it is a really interesting show. It focuses on two distinct themes: the way the modern fashion industry has exploited and destroyed the natural environment through its production processes, and the way nature has served as an inspiration to fashion and its designs through the ages. Both themes are dealt with in a competent fashion, although given the visual nature of the displays, the latter was presented in a more captivating way, while the discussion of the environmental costs of the Fashion System was mostly confined to the explanatory tablets that accompanied the displays. Between visual and textual, in fashion, the former usually wins.

END_OF_DOCUMENT_TOKEN_TO_BE_REPLACED

This is an image published on the Twitter account of … let’s go with ‘the President of the United States’. 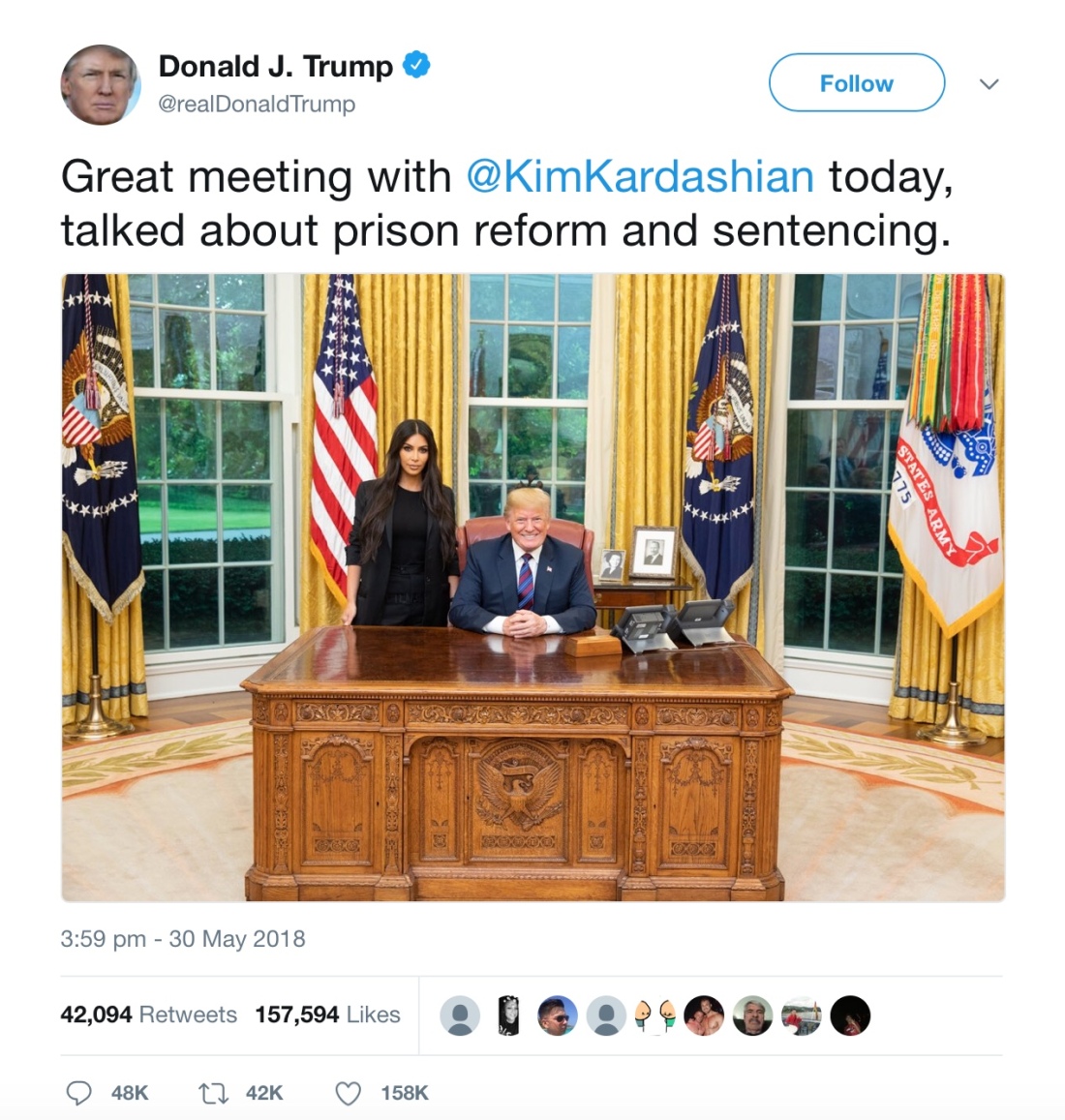 An example of the latter reading is provided by Libby Torres of ‘The Daily Beast’. For her, the image expresses that ‘Kim Kardashian got played by Trump’, that her attempt to discuss one of the most egregious cases of mandatory sentences in the US justice system simply turned into a photo-op for ‘the President of the United States’. Ms Kardashian-West’s purpose for the visit to the White House was to ask for a pardon for Alice Marie Johnson, a first-time non-violent drug offender serving a life sentence. A worthy cause, if ever there was one.

For Torres, the meeting becomes a ‘sly publicity stunt’ for ‘the President of the United States’, ‘in the end she was nothing more than a prop in Trump’s ongoing efforts to get A-list celebrities to endorse him’. Most of the media reported on the meeting with similar disdain, frequently playing on Ms Kardashian-West’s first name and its similarity to the last name of the leader of the Democratic People’s Republic of Korea. Sometimes clever, more often sexist and dumb, as it was to be expected from the relevant media.

Let’s have another, closer, and more careful look at the picture and what Ms Kardashian-West is wearing in the photo. It requires a bit of enlargement and some knowledge of fashion houses, but what becomes visible is part of the brand name ‘VETEMENTS’ stitched across her crotch, just above the top of the desk.

What does this brand name signify? As Morwenna Ferrier explains in The Guardian,

Vetements is a hip fashion collective, overseen by Demna Gvasalia, a Georgian designer who is well known within the industry for creating meme-friendly clothes at surprisingly high prices, heavily imbued with irony.

And for VOGUE, ‘Part of the genius of Demna Gvasalia’s Vetements is its appropriation and refinement of mass culture into tongue-in-cheek garments’.

So Vetements is for all intent and purpose a fashion house the products of which play with and undermine the hierarchy between high and low culture. It thereby denies any recognition of authorities that depends on such hierarchy – among them, the authority of ‘the President of the United States’, who himself has done much to undermine the authority of the office he holds.

For Ferrier, therefore, wearing Vetements becomes a moment of ironic resistance, a gesture that subtly and sublimely denies ‘the President of the United States’ what he seeks to gain from this photo op. ‘Once you’ve seen [the words across her trousers], the joke lands squarely on Trump – it is, arguably, the sartorial equivalent of doing bunny ears behind his head’.

The point here is not to settle the question which interpretation is correct or more plausible. Rather, I would like to point out that proficiency in sartorial code – on the part of those producing the relevant signifiers as well as on the part of those expected to competently read them – would expand our space for political action. And perhaps we would acknowledge the possibility that in this image, the hierarchy of cultural competence is reversed, and that the ‘gleeful, cunning grin’ betrays nothing but ignorance of its wearer. In Ferrier’s words, ‘Only Kardashian-West could use a meeting at the White House to trump Trump. And judging by his face, he had no idea what was going on next to him’.