The first duty in life is to  be as artificial as possible.

What the second duty is no one  has as yet discovered.

What assumptions support Christopher Wylie’s argument that fashion can be weaponised, that it can be used as an indicator of a person’s characteristics which in turn would allow us to tailor fake news and information in order to manipulate the outcome of political elections? It might very well be the case that, when aggregating a sufficient number of cases (87 million Facebook accounts seems to create a representative n), there is a statistically significant correlation between ‘likes’ and similar positive responses to certain fashion brands and a set of dispositions that can be manipulated for political purposes. Yet the notion that brands give us a direct link to a person’s identity, or an idea ‘who people are’, seems exaggerated. Firstly, a vast majority of people in Western societies actually care very little about their appearances, and secondly, fashion itself has lost much of its inherent symbolic value.

Wylie’s examples during the presentation are supposed to be stark to drive his point home: Crocs vs Chanel and Wrangler vs Abercrombie & Fitch. Apparently, these are supposed to be irreconcilable preferences. Yet the first example simply suggests that he missed the SS 2017 Christopher Kane runway, or the S/S 2018 Balanciaga runway which introduced Croc models as part of that show. 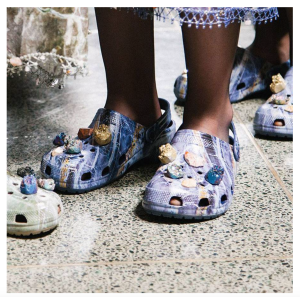 Similarly, the distinction between A&F and Wrangler might be less stable than Wylie allows for. A similar brand, Fred Perry, has seen its white polo shirts become one of the favourite garments of the alt-right in the USA. There is therefore no inherent brand identity that would protect fashion houses from being appropriated by either side of the political spectrum.

END_OF_DOCUMENT_TOKEN_TO_BE_REPLACED

A while ago, (social) media were abuzz with the news that Cambridge Analytica (CA), the notorious data mining company that illegally trawled some 50 million Facebook user profiles for political manipulation purposes in the 2016 USA presidential elections (although a first story appeared earlier about CA’s involvement in the Senate campaign by Ted Cruz) also ‘weaponised’ fashion as part of its campaign. CA apparently collected ‘likes’ that referred to fashion brands and design houses on the unsuspecting users’ Facebook pages and recorded responses like these.

I presume that this is supposed to correspond, from left to right, to a ‘conservative – moderate – liberal’ orientation…

The data that CA gathered from Facebook accounts was mapped unto an OCEAN personality profile measuring the subjects’ respective Openness, Conscientiousness, Extraversion, Agreeableness, and Neuroticism. As Christopher Wylie, CA’s ‘director of research’ claims in his presentation at Business of Fashion’s annual VOICES meeting, fashion correlates strongly with these personality characteristics. More specifically, some brands correlate strongly with ‘liberal’ characteristics such as Openness and Extraversion, other brands point to a more conservative personality, characterised by Conscientiousness and Agreeableness.

For Wylie, ‘fashion is a good entry point to people’s identity’, because we choose what to wear on a daily basis, and brands and styles reflect and reveal personal identities. All this makes it possible, he claims, to weaponise fashion as part of a systematic manipulation of the US electorate, to ‘re-segregate society’ and to lock people into their respective information ghettos. Customised information feeds lead to a ‘hyper-personalisation’ of society, in which people are manipulated according to their psychological profiles (of which their fashion preferences are a part). From a social science perspective it is interesting to note that this process of hyper-personalisation already begins with a methodological choice in which ‘culture’ and by extension fashion is defined as the distribution of attitudes among people. In other words, the very social nature of fashion is erased and reduced to an indicator attached to a target individual. The political ends here define the scientific means.