There is an excellent article in today’s NYT, discussing the likely cultural, economic and fashion repercussions of the $2.1 billion purchase of Versace by Michael Kors.

Perhaps the deal boils down to this: 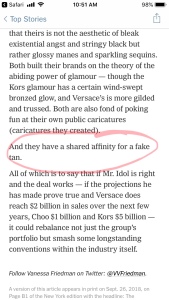 Skimming through the images on the Vogue Runway app on my iPad, I cannot help but be impressed by the continued creativity and skills of fashion designers. Overall, there was a bit too much nostalgia and ‘retro’ going on (were the 1990s really that memorable?), but some designers still showed compelling runways. A special shout-out to Tom Ford for banishing sneakers and other fashion atrocities from his (again nostalgic; really, what is it about the 90s?) runway.

But still, not all is well in the realm of fashion and style. As one of my favourite fashion writers Robin Givhan recently observed, ‘desperate to find grist for its mill’, the American fashion industry displayed on the S/S 2019 runways bad fashion. Provocation has replaced inspiration and articulation of new sartorial directions. Givhan’s judgment is harsh: designers are ‘elevating fleeting passions to the status of lifestyle brands. They’re allowing a thrill for unorthodox or jarring aesthetics to impede thoughtful consideration about technical skill and clarity of message’.

Driving the willingness to indulge (or endure) these designers is fashion’s inherent need to constantly produce novelty. Yet representing an ‘edgy’ or ‘provocative’ runway does not necessarily translate into better, or indeed novel, fashion. I share Givhan’s critical assessment of the Telfar collection, which to me appeared rather monotone and poorly fitted, constituting a puzzling regression from his Spring 2018 collection. There is also Vaquera’s rather unfocused attempt to be… provocative, I presume, although I fail to see how a top made of whistles (Trillerpfeifen, for those of you who speak German) could even raise an eyebrow other than in bewilderment. But maybe this ‘edginess’ is enough: ‘Telfar Clemens won the CFDA-Vogue Fashion Fund award in 2017. And the three-person collective known as Vaquera is a finalist this year’.

Perhaps it is possible to distinguish between this ‘bad fashion’ and ‘ugly fashion’.

END_OF_DOCUMENT_TOKEN_TO_BE_REPLACED

Going through the photos of the Met Exhibition once more, I came across the following one. Marianne Franklin wrote a fantastic chapter on ‘What (Not) to Wear’ in the book, a critical discussion of how different countries in Europe try to legislate against wearing headscarves and niqabs in public.

So I am wondering: would it be illegal to wear these items of high fashion (designed by Dolce & Gabbana, no less) in these countries? How does one decide whether a particular garment is a statement of religion, or a fashion statement? And is there really a line between these?

The thud with which the VOGUE September Issue landed on my desk some days ago provided a gentle reminder that I have yet to write about the current exhibition Heavenly Bodies: Fashion and the Catholic Imagination at the Metropolitan Museum of Art in NYC. And after finally finishing what could at least be considered a first draft of a paper for a conference on Baudrillard next week in Oxford, it seems opportune to finally put some of my impressions and some ideas that emerged in discussions with other fashionistas onto this blog’s pages.

First and foremost, the exhibition is spectacular, up there with China Through the Looking Glass of 2015, and a welcome return to form after two rather underwhelming fashion exhibitions during the last two years. If you have the opportunity, do go see it, it’s worth your time.

What, then, does the show tell us about the role fashion plays in religion, and, perhaps more interestingly and challenging, what role does religion play in fashion? With regard to the first question, the exhibition refers to Andrew Greeley’s concept of the ‘Catholic Imagination’. As the blurb of his book describes it,