Vanessa Friedman recently published an interesting piece in the New York Times on fashion, power and the next US President, or as she calls her, ‘The First Female President’. What will her sartorial code, her ‘fashion diplomacy’ be? This was in fact one of the topics that came up after my presentation at ISA-Northeast in Baltimore last Friday. I ventured a few thoughts about the tightrope that Madam President would have to walk between the conservative demands of the office and the reservoir for creativity that fashion offers to women. It was a very good panel and a productive discussion. Many thanks to Rose Shinko for her brilliant comments on my very rough paper.

Friedman takes a different tack by focusing on Robin Wight’s dress code as President Claire Underwood in the last season of House of Cards.

The analysis of President Underwood’s wardrobe is excellent in typical Friedman fashion.

Imagine the classic corporate suit and tie spliced with the style of a World War II Women’s Army Corps member, and topped by a dash of Helmut Newton perversity, and you’ll get the idea. Who needs shoulder pads when your seams are cut on a knife’s edge?

French cuffs with special cufflinks and Louboutin heels complete the power female look, as does the very absence of one item usually associated with female public figures: the handbag. In the words of one of the shows wardrobe experts: ‘I thought: “Claire is not carrying a bag. She has people for that. She’s president”’.

On the face of it, this is a compelling argument, and perhaps we should expect that along with the shift from ‘First Lady’ to ‘Madam President’ we shall witness a shift towards less feminine styles. But I remain sceptical about how far Friedman’s argument that Claire Underwood provides a ‘a pretty convincing take on how the first Madam President might present herself’ carries. Given the twisted and dark plotline of House of Cards with the new president still playing a central role in the depicted machinations of power, what female president would want to ‘look like Claire Underwood’? The above characterisation suggests that her style will look in hindsight as an idiosyncratic than representative style.

Secondly, as Daniel Conway’s chapter in The International Politics of Fashion demonstrates, in the right hands, handbags can be political weapons. The former British Prime Margaret Thatcher used hers to emphasise her abrasive style in European Community negotiations. Writes Conway, ‘Such was the power of her dress, one element became a universal metaphor for political and diplomatic behaviour: ‘to handbag’ or to receive a ‘handbagging’ (Oxford English Dictionary: 1993)’. And apparently, she was quite selective in her taste: her increasing desire to appear at least as royal as the Queen is also revealed in her choice of Aspreys bags – the same manufacturer Her Majesty preferred.

The one bag the next President will not have to carry is the ‘nuclear football’. 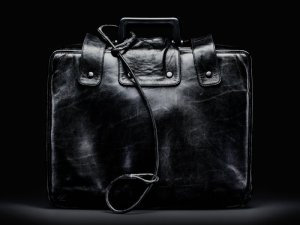 For that task, she can rely on a military aide-de-camp. Apparently, this is usually a male person. Perhaps under the next US President, it will be a female officer?