Well, the dress was everything and more. It did transform an American actress into a British duchess, and it became an object of acclamation for the crowds present at Windsor or watching from afar on TV sets around the world. As explained on royal.uk, the gown was designed by Clare Wraight Keller, the artistic director of the House of Givenchy from Birmingham, UK.

True to the heritage of the house, the pure lines of the dress are achieved using six meticulously placed seams. The focus of the dress is the graphic open bateau neckline that gracefully frames the shoulders and emphasises the slender sculpted waist. The lines of the dress extend towards the back where the train flows in soft round folds cushioned by an underskirt in triple silk organza. The slim three-quarter sleeves add a note of refined modernity.

‘Givenchy’ is of course a signifier for a trans-Atlantic relationship that refers to Hollywood elegance that draws on European refined designs. It references the simple elegance of Audrey Hepburn in a little black dress in Breakfast at Tiffany’s – and, even more apropos, a wedding dress in Funny Face. The choice of a Givenchy wedding dress acknowledges Meghan Markle’s own Hollywood past and translates it into the sublime glamour she injected so successfully into the staid rituals of the British monarchy. I shall not comment here on the other African-American elements that made the ceremony thoroughly enjoyable and unpredictable; after all, this blog is about the politics of fashion.

As my favourite fashion writers agree, the dress served one purpose only: to introduce Meghan Markle and her extraordinary personality to the British monarchy and to the British people. While Kate Middleton recognised the historicity of the monarchy by indexing Victorian elements of style with her (still fab) Alexander McQueen dress, Markle’s dress referenced only herself, her presence in the present. Writes Vanessa Friedman (NYT),

It was not a Cinderella choice, not one that spoke of fantasy or old-fashioned fairy tales, but one that placed the woman proudly front and center. It underscored Ms. Markle’s own independence by divesting her of frippery, while also respecting tradition and keeping her covered up.

Her walk down the aisle, unaccompanied for most of it, only added to the sublime effect. Prince Harry was right, she looked amazing. Even in the official pictures released by Kensington Palace, she stands out, in the centre, and as the centre of the Royal Family, an ‘antibody’ to the slow decay and descent into irrelevance of the latter. 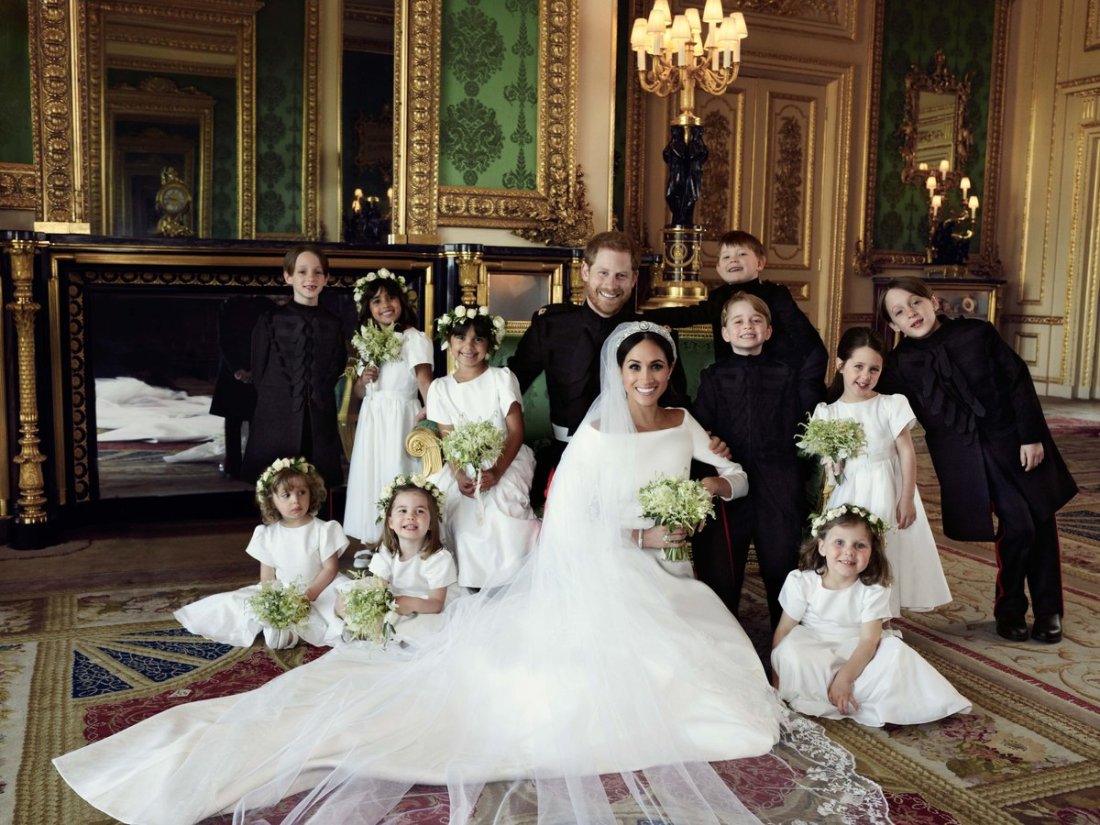 So this then is the politics of the Duchess of Sussex’ fashion choices: to provide a sartorial element that supports the popular acclamation of the monarchy and its apparently willingness to include a rather unconventional personality (I shall write more about acclamation in a future blog entry). Not everything is about the dress, but it certainly amplified her message and provided a focus for popular approval. It was apparently a very personal choice in cooperation with Ms Waight Keller, so we can safely assume that it expressed a very consciously chosen message. I look forward to reviewing the Duchess’s future sartorial choices, hoping she will escape some of the dodgy choice of the Duchess of Cambridge.

If I sound like a fan boy here, well, that’s because I am. This was simply an amazing sartorial performance as part of an even more stunning ceremony. I live in both the USA and the UK, and I admit to a certain level of glee to see African-American culture and sartorial ‘fabness’ injected into the rigidly codified and regulated British traditions. Perhaps the jazzed-up Britishness was best presented by Amal Clooney, a Lebanese-British barrister, married to a Hollywood actor (he cleaned up nicely too) and dressed in a gorgeous saffron-coloured dress by Stella McCartney. I am not the biggest fan of Ms McCartney’ designs, but this dress, together with the fascinator, was stunning.

Alas, I would be remiss not to mention the dissident voices that address the politics of Ms Markle’s sartorial performance from a very different angle. Rather than acclamation, these voices offer a post-colonial critique of the symbols used in the dress. The latter are explained in the official statement of Kensington Palace:

Ms. Markle expressed the wish of having all 53 countries of the Commonwealth with her on her journey through the ceremony. Ms. Waight Keller designed a veil representing the distinctive flora of each Commonwealth country united in one spectacular floral composition.

The Commonwealth family of nations – of which Her Majesty The Queen is Head –will be a central part of Prince Harry’s and Ms. Markle’s official work following   His Royal Highness’s appointment as Commonwealth Youth Ambassador. Ms. Markle wanted to express her gratitude for the opportunity to support the work of the Commonwealth by incorporating references to its members into the design of her wedding dress.

There is a different interpretation available, one that points straight to the role of violence, power and exploitation in the history of current political order. Writes Aparna Kapadia,

Missing in the commentary was what seems to be an obvious point– the arrogant representation of 53 Commonwealth countries is a celebration of colonial rule. Another reminder, if one was needed, that the true reckoning of the unfortunate history of colonialism in Britain is far away. It is important to restate what that was – a violent period of centuries when the hapless Commonwealth, nearly 25% of the world, suffered under an extractive alien power’s rule.

Significantly, to celebrate a hand-made garment in praise of the Commonwealth raised some issues in India.

When India was a colony of England, Indian weavers saw a downturn in their business. The Calico Acts of the early 1700s effectively banned the import of most cotton textiles into England, many of which came from India.

From this time, until India’s Independence in 1947, the Indian artisan and weaver’s livelihood and skills were systematically destroyed. It was no accident then that Gandhi chose the charkha, the Indian weavers’ basic cotton-spinning tool, as the symbol of India’s struggle for independence.

Kapadia’s article resonated in India via social media. And it does raise an interesting and deeply problematic point. What happens when we re-appropriate and aestheticise violent pasts for the sake of contemporary acclamation and legitimation?

For a number of reasons, mostly related to the inability to speak for ‘the Other’  I am in no position to offer a conclusive answer here. From a critical theoretical perspective from within Political Science I would point to the continuous and ubiquitous presence of structures of power, violence and exploitation, of which colonial domination is but one, albeit a historically crucial and central one. Does that history dominate and determine the present and the future? Is India still a ‘former British colony’? Or has enough time past, as some commentators suggest, to declare another form of independence?

Again, I am in no position to offer even a tentative answer to these questions. But I note with some delight that Ms Markle’s fashion choices opened up, if inadvertently, a space for critical reflection on the problematic colonial past of this peculiar country. The fact that she, as a ‘mixed race person’ does this representing the subaltern voice in American culture adds yet another fascinating twist to the politics of fashion.

P.S. The person I admired the most in the ceremony was neither ‘royal’ nor ‘Hollywood’. Yet the Oscar de la Renta dress she wore was beautifully emphasising her regal and dignified personality.

One thought on “How to Fashion a Monarchy: Signifying a Popular Future or an Imperialist Past?”